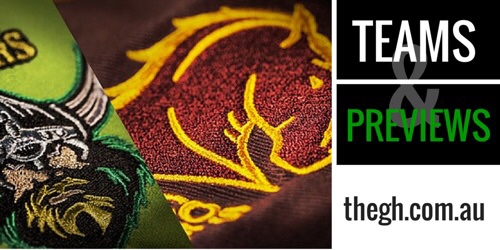 New recruit Erin Clark will make his debut after being named at hooker. Kiwi Paul Roache will return at five-eighth from a knee injury, which has kept him sidelined since earlier in the season. Captain Kalani Going will play his first game since round eight.

I'm a bit surprised not to see Clark at mounties given he has first grade experience.
Top

I'm a bit surprised not to see Clark at mounties given he has first grade experience.

From what I've read most Warriors fans were up in arms that he got to taste first grade.
well, I guess you could say that I'm buy curious.
Top

From what I saw of the Auckland nines I liked the look of Roache.
Top 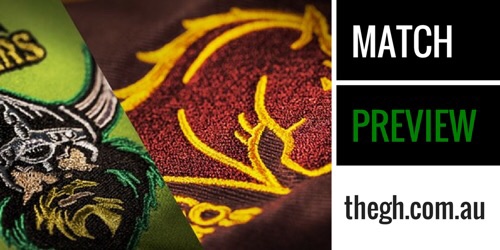 The Holden Cup Canberra Raiders pressed the ladder leading Penrith Panthers all the way in Round 14 - but could not come away with a victory. The Panthers are placed equal first, alongside the Cronulla Sharks - and the men in green did well to come within six points, eventually going down 28-22.

The first half was a see-sawing affair, with tit for tat tries. The Panthers went out to an early lead after just nine minutes, but the Raiders quickly bounced back with a try to Jack Murchie - for a 6-4 score line. Panthers half Dean Blore produced a try in the 20th minute, when he put a kick through - which luckily ricocheted off a Raiders player and back into his arms. Seven minutes later, the Raiders hit back again, with Emre Guler gathering a loose ball and charging over the line. But a Brian Too try in the 31st minute gave the Panthers a 16-10 advantage at the break.

The Raiders showed renewed vigour in the second half, and Jack Murchie crashed over for his second try in the 50th minute, levelling the score at 16-16. The Panthers again responded a few minutes later with a try to winger Daniel Brown - and took a 28-16 lead with a try to forward Jake Brennan. However, Canberra would not give up and a converted try to Sebastian Kris with four minutes to go, gave the Green Machine a chance to at least force a draw. The Raiders attacked right to the final minute, but couldn't quite get there.

The loss has seen the Raiders drop to 12th place on the competition ladder - but they are just two competition points away from the top eight.

This weekend, the Raiders meet the 13th placed Brisbane Broncos, with both teams having a 6-8 record.

The Broncos were 28-22 losers to the South Sydney Rabbitohs in their last start. They're on a six game losing streak, and suffered some big losses to the Panthers and Sea Eagles over that period. The Raiders are not faring much better and have a LLWLL form line in the past five matches.

The Raiders average 24 points (4.4 tries) scored per match, just a shade better than the Broncos (23 points and 4.2 tries per match). The Broncos, however, have slightly better defence, conceding 4.9 tries per match (five for the Raiders). Canberra has a good record at home (5-1), while the Broncos have been better on the road (4-3) than at Lang Park.

The Raiders have named new mid season recruit from the Warriors, Erin Clark, to make his debut in the green at hooker. Captain Kalani Going (jaw) and Paul Roache (knee) returns to the team after long stints on the sideline with injury. Sebastian Kris will back up from the Under 18s State of Origin - where he scored two tries for the Blues.

For the Broncos, back rower Keenan Palasia moves to prop to replace Sam Elliott (high ankle sprain). Ed Burns moves into the starting team in the second row. Bench hooker Brent Woolf (dislocated shoulder) is out, with Dray Ngatuere-Wroe coming onto the bench as a utility. The Broncos' Under 18 Origin representatives, hooker Tyson Smoothy and forwards, Brandon Russell, Eddie Blacker and Payne Haas have all been named.

Our tip: There's not much between the teams statistically. When the two teams met at Lang Park in Round 4, the Broncos won 24-16. The Broncos have more players backing up from the Under 18s Origin - but anyone who saw that Origin match will attest to the quality of the likes of Haas and Blacker. The Broncos also have a handful of representatives from the Under 20s Origin a few weeks ago. On the other hand, there are some significant inclusions for the Raiders - in particular, Going, who was in top form before his injury. It should be a close match. We'll go with the Raiders at home.

A host of big inclusions headline a rejuvenated Canberra Raiders outfit as they look to get their season back on track with a win over the Broncos this Saturday.

Three young Kiwis will join Brett Whites squad for this week, including new signing Erin Clark who will make his debut for the club despite playing two games for the New Zealand Warriors NRL side earlier this season.

Welcome to our coverage of today's Holden Cup clash between the Canberra Raiders and Brisbane Broncos. Final team line ups (if supplied) after 2:15pm:

4th min TRY BRONCOS in the corner to winger David Fauid, running on the last. Looked like it was bounced. Gerome Burns misses the conversion.

8th min TRY BRONCOS to Corey Allan, it's a bit of a runaway and a poor start for the Raiders. Gerome Burns gets the goal.

20th min TRY RAIDERS to Will Samuel. No conversion Niko.

30th min TRY BRONCOS to centre Kotoni Staggs out wide on the eastern side. No conversion from the sideline.

38th min TRY RAIDERS to Timoci Vatubuli. It's a spectacular chip and chase to Paul Roache, and Vatubuli backs up! Roach has made some good breaks as well this half. Niko converts.

46th min TRY RAIDERS to half back Lachlan Cooper. Niko misses the goal from a relatively easy position.

63rd min TRY BRONCOS and it's converted by Kotoni Staggs from close to the posts.

67th min Jack Murchie nearly goes over, the Raiders get a penalty instead.
The official Greenhouse score update service
Top

72nd min TRY BRONCOS to Gehamat Shibasaki, the result of a kick through. That could be it for this match. No conversion.

75th min Komiti Tuilagi goes over in the corner for Canberra but the final pass is ruled forward.
The official Greenhouse score update service
Top

77th min TRY BRONCOS after the ball bounces off the post. Rory Ferguson is the scorer. That's it, all over. Haydyn O’Hara Converts.

I shouldn't point anyone in particular out after that loss, but Vatubuli was terrible in defence out there. Couldn't read a kick to save himself.
Top

Seiffert82 wrote:I shouldn't point anyone in particular out after that loss, but Vatubuli was terrible in defence out there. Couldn't read a kick to save himself.

Very good in attack at times though.

How did Erin Clark look?

He went OK, it was Roache who really made an impact though.

A strong second half has seen the Brisbane Broncos emerge 34-20 victors over the Canberra Raiders in the NYC at Canberra Stadium on Saturday afternoon.

The Raiders took a 16-14 lead into half-time but it was the Broncos who would run in a trio of second-half tries to Canberra’s one as Brett White’s men fell to their third consecutive win. The Raiders are now set to host the North Queensland Cowboys next Saturday evening as they look to remain in contention with the top eight.

Seiffert82 wrote:I shouldn't point anyone in particular out after that loss, but Vatubuli was terrible in defence out there. Couldn't read a kick to save himself.