The Canberra community is getting behind the 13-year-old boy injured in Tuesday's horrific Kings Highway crash. Thomas 'TJ' Campagna was travelling with his mother and a family friend when a motorist, allegedly under the influence of ice, drove onto the wrong side of the road.

His mother Alanna Davis organised a social media campaign using the hashtag #Footy4TJ where people are asked to post a photo wearing their favourite rugby league or union jersey.

Nice thing for Ricky to do on Christmas morning: https://www.facebook.com/TheGHRaiders/p ... 6297137359" onclick="window.open(this.href);return false; 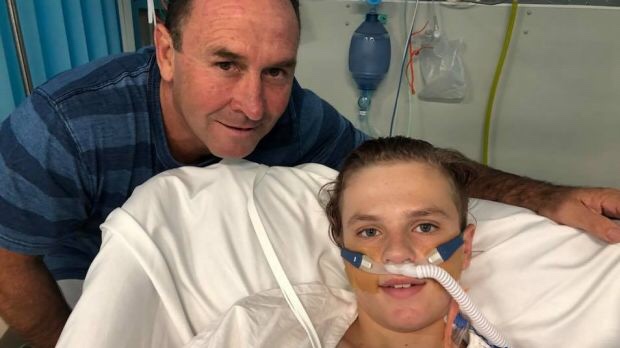 Canberra Raiders' coach Ricky Stuart took some time out from his own Christmas morning to visit the 13-year-old boy injured in Tuesday's Kings Highway crash.

Stuart spent about 20 minutes talking to Thomas "TJ" Campagna at the Canberra Hospital, bringing him a present and the offer to sit in the coach's box at a Raiders game next season.

Thanking you all for your support, prayers and thoughts. We are blessed to be part of such a wonderful community, especially from within the Rugby league community.

Please keep TJ in your thoughts and prayers over the coming weeks. He needs lots of positive energy sent his way.

With much gratitude
Alanna and Joe (TJ’s parents)
Top

Sent from my SM-G950F using Tapatalk

Yeah, all the best Alanna, Joe and TJ.

Good on you Sticky.

Having spent a truly awful piece of this year sleeping each night in a chair next to a sick kid in hospital, LarnaD, I know exactly how you feel.

He'll get better, he'll get back on the field and, if you're anything like me, you'll stand there on the sideline at his first game back with tears running down your cheeks, loving every second of it.

Best wishes to you and the family.

Wishing all good things to come your way in 2018 LarnaD, Joe and TJ.

To Sticky, what a wonderful thing to do.